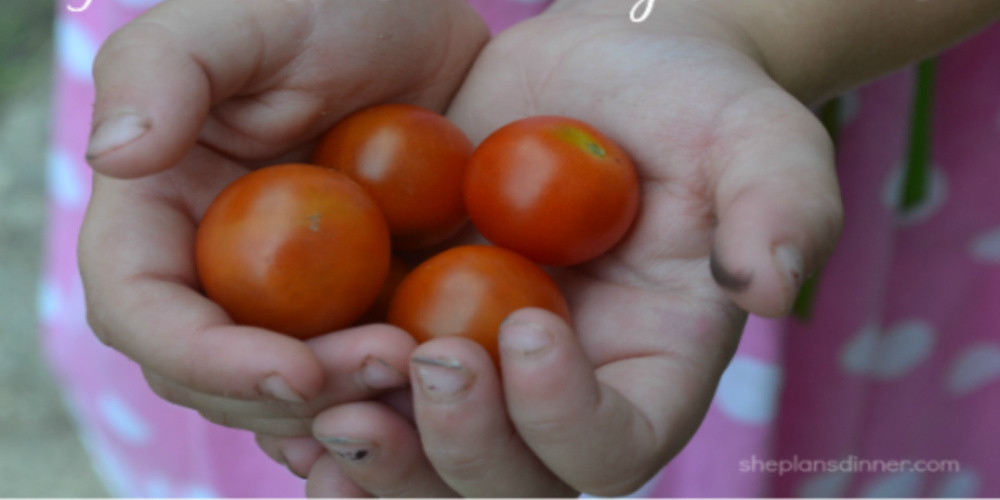 Cooking in season invokes two different ideas for me:

Summer cooking is fast and fresh, using ingredients from my garden and local farms. School year cooking is slow and easy. It’s all about time, and a feast for the senses.

If you follow me on Facebook, you know that my summer meals have been centered on my abundant garden yields.

And when I say “garden” I mean my four better beef tomato plants and four cherry tomato plants staggered in a 30″ by 7′ plot. And my three pots of various herbs-but mostly basil. So.much.basil. But also oregano, thyme, tarragon, rosemary and chives.

Obviously, a farmer in the dell, I am not.

But, I love, love, love (!) walking out to my tiny garden to pick bowls of tomatoes or snip handfuls of herbs for our dinner.

Despite it’s minuscule size, I still managed to harvest an average of 1-2 cups of cherry tomatoes every single day from mid-July until early September. That is a whole lot of cherry tomatoes from four plants! I also had plenty of the regular tomatoes to keep me in sandwiches and taco toppings and everything else for the same period of time. I finally bought round tomatoes again this week.

On top of my own harvest, I’ve been blessed with offerings from both my brother’s garden, and my sister-in-law’s garden. Between the two of them, I was gifted with an additional 3/4 of a bushel of tomatoes, a couple zucchinis, cucumbers, and several peppers-both bell and hot. Yum!

Garden abundance is meant for sharing, and I am so grateful for those who generously shared their’s with me.

Cooking in season means, as I plan my family’s menus, and the menus for you, I’m looking for all the recipes that use all the tomatoes…especially the cherry tomatoes.

Some of our favorites include:

Almost all of these recipes are on the menus for July, August or September. If you find yourself inundated with tomatoes, or zucchini, take a look at the recent menus for ways to use them. You won’t be sorry.

During the summer I tend to do “fast” cooking. I grill meat, and we eat easy, fruit and vegetable heavy, side dishes. I spend my summer doing summer things…like bicycling, napping, reading, and running my kids back and forth to camp and driver’s training and swim lessons. Dinners generally take 30-45 minutes to get on the table.

However, during the school year, I cook differently. I cook “slow.”

Last week was our first week of school. I made bread three times. (not even kidding!) It’s because I can mix it up while my youngest is reading aloud to me-like she does every day. And I punch it down, and then shape it, through out the mornings. By lunchtime, I have a gorgeous batch of fresh bread ready to go.

Another fall favorite is crockpot tapioca pudding. Nothing is easier. Large pearl tapioca, sugar and milk in a crockpot on high for a couple hours. Mix in eggs and vanilla. Gorgeous. Delicious. Super simple.

Tapioca pudding recipe is coming to the early November menus. Sign up today and don’t miss out.

My workhorse during the school year is my crockpot. I know there are those of you who love the Instapot, but…to each their own, right?

Cooking in season and slow fall cooking also speaks to me of having something roasting or simmering for hours, making my house smell unbelievably amazing! Another super easy favorite is Pork Ragu. I make this at least once a month. I make it for guests, and my boys’ friends, and for catering. It is so good, and SO easy.

I brown the pork shoulder in my Le Creuset, then brown some onions and garlic around it. I add a bottle of dry red wine, and some tomatoes and herbs, and roast it for hours and hours in the oven. Seriously?! There is SO much bang for that buck! This recipe will also be on the early November menus. Get excited!

Cooking in season during the fall, winter, and early spring also means big pots of soup in my house, at least once a week. Yesterday it was cold and rainy here in the Mitten. My roofer husband thought I said I was making soup for dinner. (he misheard me, because I wasn’t.) But, I love my man, and I made him a big pot of Dilly Potato Soup to enjoy after that long, chilly day. Our favorite soup recipes are on SPD menus from September through May.

What are some ways you practice cooking in season?